The TLC Festival was recently held at Bonifacio Highstreet. Eversince I saw the ad to this event in Facebook, I was excited and pre-registered online. It was just a one day event full of activities. One of the reasons why I signed up was because Cake Boss, Buddy Valastro, would be there. I mean, who wouldn’t want to meet Buddy, right? 😀

Anyway, we arrived at the event in the afternoon already. I never really expected much, apart from the fact that there will be a lot of people. Activity areas had long lines of people, too, and I didn’t want to waste time lining up. Instead, we just strolled through the area just like we always do. Haha! There were photo/video booth of some sort, there was an area for letting your creativity flow, there’s a cooking area, and a few more. I didn’t get a chance to stay and check out the areas.

Del Monte was there, too, just beside the makeshift stage, handing out free pasta and iced tea. 🙂

Afterwards, we headed down towards the ampitheater. On our way there, I couldn’t resist having our photo taken with this:

The main stage was set up along 7th Avenue, beside Mango Tree. There were a lot of people already so there was no way for us to get closer to the stage. The hosts were about to introduce the stars of Surfing the Menu. I am not familiar with this show in TLC but the people were screaming when the two guys got on stage that Z held on tight because he was frightened by the screams.

They had a short cooking demo (pan-seared salmon with soy sauce, lemon and maple syrup and blanched greens). After their demo, we headed down to the ampitheater. There were a lot of people in the open stage, waiting for Buddy.

I tried to get a video of Buddy and his wife, Lisa, arriving at the open stage but being short and already behind a few lines of people, it was really hard to get a clear video. Majority of what I got were arms and camera phones raised and heads so I didn’t upload it in YouTube anymore. LOL! There were also people behind me pushing forward, screaming Buddy’s name, then suddenly I heard one lady ask her companion “sino sya? (Who is he?)” after screaming Buddy’s name. I just wanted to turn around and give them that are-you-effing-kidding-me look. LOL! Seriously, they were right behind me, two ladies, both screaming Buddy’s name, then suddenly one of them asked who he was. Argh! I have no words. LOL!

When Buddy got on stage, people started moving forward again, occupying every space in front of them that they could find. I had a few guys who blocked my view, apart from the ones in front of me who were raising the camera phones and tablets so high I could no longer get a good view of the stage.

But here’s a snapshot from one of the video clips I attempted to take. That’s Buddy right there. 🙂 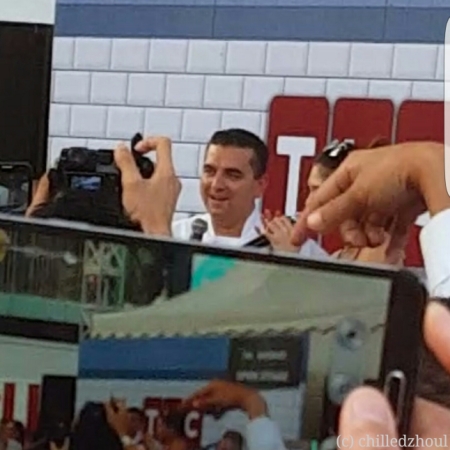 All the TLC stars in attendance (I didn’t get to see Janet Hsieh) went back to the main stage for the closing program at around 6 or 7pm, I think. I decided not to stay because the crowd was getting huge and I am not really fond of crowds, especially since I had the little boy with me. We just roamed around for a few minutes then headed to McDonald’s for a quick dinner before we headed home.

I had fun even if I didn’t get to win prizes or even participated in any of the games. I didn’t even attend the cake decorating event that I registered in because I was tired already from walking and carrying the little boy. And I got to see Buddy, even if he was a few meters away. I envied the people who were able to take a selfie with Buddy but what I really envied were the people who got to have a master class with the Cake Boss himself the day after the festival. Who doesn’t want to be taught how to decorate a cake by the Cake Boss, right? But since he said that he will be back, I might as well start preparing for it. Who knows, I may be fortunate enough to meet him the next time. Hee Hee!

I didn’t know that this was a yearly event for the past few years now (not sure though when it started). I will definitely look forward to next year’s festival should there be one again (which I hope there will be). 🙂

Ladies And Gentlemen, Science Circus Has Come To Town!